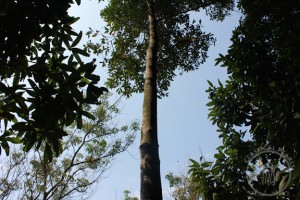 The cinnamon tree has been one of China’s most important herbal sources since antiquity. The Shanghan lun, China’s most revered herbal classic written 1,850 years ago, deliberately commences its introduction of classical prescriptions with Guizhi Tang (Cinnamon Decoction). According to the theory of flavors put forward in the Tangye jing, another influential herb primer from the formative period of Chinese medicine, pungent medicinals have the ability to stimulate the moving power inherent in all life forms. Perhaps more than any other plant, cinnamon’s unique fusion of sweet and spicy flavors have made it a general symbol of yang qi in China. It grows only in the deep South, and is therefore regarded as a warming “solar” plant that has the ability to drive out all cold, stagnant and evil yin influences. No weeds grow underneath a cinnamon tree, even in the thickest jungle. 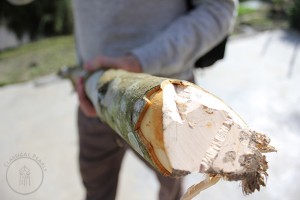 In addition, the Shen Nong bencao jing, China’s earliest material medica, lists cinnamon as one of the few materials that has the ability to “tong shen” (invigorate mental function and establish connection to the spirit world), a fact that has been incorporated into the Chinese name of the plant. Gui 桂 literally means “the plant that is shaped like the ritual jade instrument Gui, and which in similar fashion can establish connection to the spirit world.” 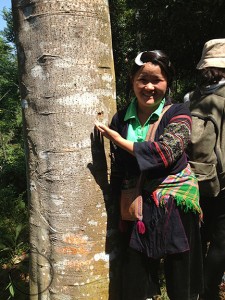 In the beginning, primarily the branches of the plant (Guizhi) were used for medicinal purposes and recorded as a major ingredient in the prescriptions of the Shanghan lun and other herbal classics. It was not until the 7th or 8th century that cinnamon bark (Rougui) was introduced as a medicinal substance in China. While Guizhi is generally associated with a primarily moving effect (opening without being too dispersing for spleen deficient individuals), Rougui has traditionally been considered to be a tonic that anchors kidney yang (consolidating without causing stagnation). In general, it can be said that the high value ascribed to cinnamon in ancient herbal classics comes from the plant’s unique ability to mobilize and circulate the body’s life forces while supplementing rather than reducing the body’s yang qi. This quality of driving out excess and warming deficiency at the same time is an exceedingly rare quality when compared to other pungent herbs, making cinnamon materials most suitable for constitutional therapy and the long-term treatment of chronic disease.

Modern herbal curricula have come to categorize Guizhi as an herb for the common (external) cold and Rougui as a key material for the treatment of (internal) yang deficiency, thereby greatly limiting the wide range of applications ascribed to cinnamon in ancient times. According to successful modern clinicians who still practice in the style of the life promoting theories put forth in the Shanghan lun, cinnamon remains one of the most important herbs for the treatment of serious diseases today. Cinnamon’s ability to promote and circulate the body’s yang forces thus appears all the more important in an era when most of the world’s population suffers from the symptoms of rampant antibiotic (anti-yang medication) overuse, such as chronic lack of energy, immune deficiency, autoimmune dysregulation (allergies), and circulatory problems. 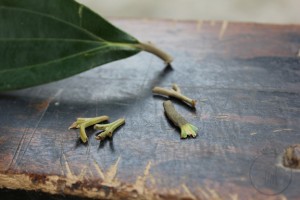 Classical commentators have offered the following opinions about the range of organ systems that cinnamon affects or “enters”: 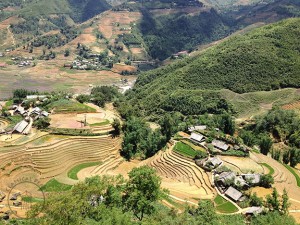 The cinnamon plant flourishes in tropical climates, where it absorbs the hot energy of the phase element fire. The Southern provinces of Guangdong, Southern Yunnan and especially Guangxi are the main cinnamon producers in China. While most medicinal cinnamon used in China comes from the Cinnamomum cassia variety, it is important to note that the clinically extremely relevant Fire Spirit School of Chinese herbalism favors Vietnamese cinnamon (Cinnamomum loureirii), often referred to as Saigon Cinnamon in the West. This particular preference has been validated by modern biochemical testing methods. The essential oils in the Cinnamomum loureirii species have proven to be 25% more concentrated than that of their most commonly cultivated Chinese counterpart. 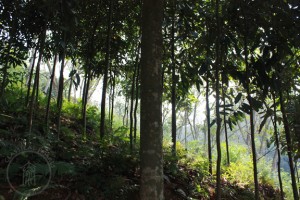 While this highest grade of cinnamon has been imported into China for centuries, the Vietnamese government has recently declared the wild form of this plant a protected species and implemented a law that forbids harvesting and exporting. The cultivated form of this plant, however, is still readily available and favored by essential oil companies and spice merchants in the West. In addition, 15 years ago some Vietnamese Cinnamomum loureirii seedlings were brought across the border into Southern Yunnan where they have been successfully cultivated.

No weeds grow underneath cinnamon trees, even in a tropical jungle environment (evidence of the pathogen repellant effect of the plant) 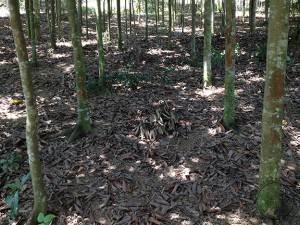 It should be noted that the general quality of medicinal grade cinnamon has markedly declined in recent years. Increasing labor costs in China have caused major changes in the process of sourcing and producing both Guizhi and Rougui. Cinnamon cultivation tends to follow more and more the demands of the spice trade, which favors thinner bark and utilizes none of the twigs. In addition, collection of the lightweight twigs tends to be labor intensive and is often not done anymore. In addition, Southern herb traders warn that a majority of the cinnamon farmers in Guangxi, where the bulk of the Chinese cassia variety is produced, extract the essential oil from the branches before they dry them, cut them into small pieces, and sell the leached out wood chips as Guizhi on the national herb markets.

Classical Pearls is proud to collaborate with some of the local mountain tribes in Northern Vietnam where the premium grade loureirii species is grown in a still unpolluted environment. Local cinnamon farmers cut the branches and bark according to traditional specifications that are gradually getting lost in modern China. 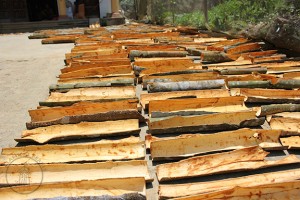 Rougui is sun dried after harvest.
×