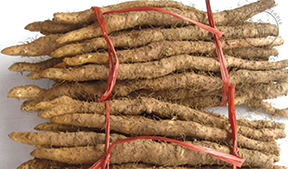 Shanyao (Dioscorea opposita) is a Chinese yam related to the Wild Yam (Dioscorea villosa) of Western herbalism, which is best known as a bioidentical hormone tonic for menopausal women. Shanyao was originally called Shuyu in classical Chinese texts, but its designation was changed to Shanyao when similar components in the names of two Tang and Song dynasty emperors rendered the common use of the characters Shu and Yu taboo. Shuyu literally translates as “Giant Tuber that Cures Everything” or “Gigantic Root that Nourishes Reserves.” The cure-all effect attributed to Shanyao in classical herb descriptions was first corroborated by Zhang Zhongjing in his 1,800 year old clinical primer Jingui yaolüe, where Shuyu Wan (Dioscorea Pill) is said to be “indicated for all states of deficiency.” 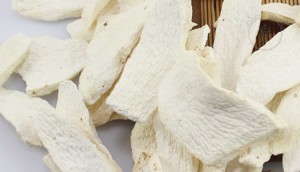 Shanyao is perhaps the blandest of all Chinese herbs. As a result, it has become treasured in Chinese cooking as a food grade qi tonic included in everyday soups and gruels. In particular, it has the reputation of being a safe and effective tonic for children suffering from weak digestion and/or malnutrition. One of the many alternate names for the mother plant is therefore Ercao (Children’s Herb).  Modern research has shown that Shanyao is rich in vitamins, polysaccharides, amino acids, calcium, copper, zinc and other trace minerals—a natural equivalent to a modern multi-nutrient supplement formula. 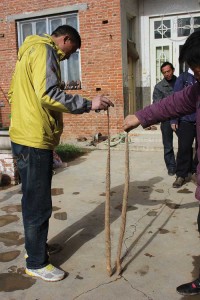 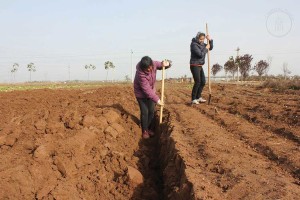 The traditional growing location for Shanyao roots of the highest quality is known throughout Asia as Huai Prefecture in the heartland of ancient China (in the vicinity of the city of Jiaozuo in today’s Henan province). Local histories claim that Duke Weihuan of the state of Wei presented the King of Zhou with an offering of local Shuyu roots as early as 734 BC. Huai means “bosom,” referring to the region’s embrace by the Taihang Mountains in the North and the Yellow River in the South. With mountains in the back and flowing water in the front, the region became one of the emblems for perfect fengshui and was fought over in many historical battles. A traditional accolade of the local climate exalts: “Not too dry in the spring, not too hot in the summer, not too flooded in the fall, and not too cold in the winter.” 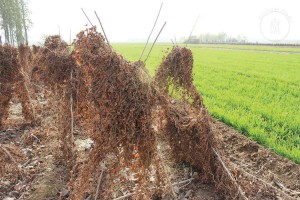 As a valued food item, Shanyao has been cultivated all over China for hundreds of years. Due to the unique mineral composition of the soil in the Huai region, however, ancient scholars and contemporary biochemists agree that medicinal grade Shanyao can only be grown here. Roots that carry the designation Huai Shanyao look different (larger, harder, with large raised hair follicles and purple markings on the skin), behave differently (hard to break, sound like an iron rod when dropped, and don’t disintegrate after boiling), and test differently (significantly higher amino acid and mineral content). When the Huai Shanyao species was planted in other regions of China and Japan during the 1970s in an effort to cultivate the precious medicinal grade variety in other soils, the transposed plants gradually transformed themselves into the less valuable food grade variety Cai Shanyao (vegetable grade Shanyao). Genuine Shanyao is therefore only grown in the Huai region, which encompasses approximately 10,000 acres of agricultural land capable of producing about 100,000 tons of Huai Shanyao per year—insufficient to meet Chinese and international demand for the genuine item. As is the case with other highly valued didao medicinals, such as Fuzi from Jiangyou in Sichuan or Pu’er tea from the mountains of Xishuangbana in Yunnan, much of the Huai Shanyao on the market today is the food grade variety produced by farms in Shandong or Hebei, but sold under the label “genuine Huai Shanyao.”

Classical Pearls has made a special effort to cooperate with a family owned farm in the Huai region to produce biodynamic Lutu Tiegun Shanyao (Iron Rod Shanyao Grown in Hard Soil), the highest grade varietal among the various subspecies of Huai Shanyao. This type so thoroughly absorbs the nutrients from the mineral rich soil that a Shanyao field needs to lay fallow or grow other crops for a “revitalization period” of 5 years, before another batch of Shanyao can be grown in the same spot again. The 17th century master herbalist Li Shizhen wrote that cultivated Shanyao is ideal for daily consumption, while the wild variety is most suitable for medicinal use. In modern times virtually all commercially traded Shanyao is cultivated, and it is the Lutu variety that phytopharmacology experts now consider to exhibit the hallmarks of medicinal grade Shanyao.

To increase the shelf life of the dried Shanyao roots, the herb merchants of the Huai region developed 100 years ago what is now known as the oldest form of sulfur processing for Chinese herbs. This method was soon applied to other substances, since it turns white herbs brilliantly white (Shanyao, Beishashen, Beimu) and red herbs brilliantly red (Gouqizi). The process of sulfuring, however, has been recognized as a negative influence on the nutritional and medicinal property of foods and herbs. Despite a recent moratorium by the Chinese government to stop sulfur processing of medicinal substances, the practice is continued by most of the region’s Shanyao businesses. Merchants fear that consumers have become used to the snow-white look of sulfured Shanyao. Moreover, processes that finish the roots without the addition of sulfur yield 30% less of the finished product. Classical Pearls preserves the medicinal quality of its premium grade Lutu Tiegun Shanyao by employing natural drying processes that deliberately avoid sulfur.
×