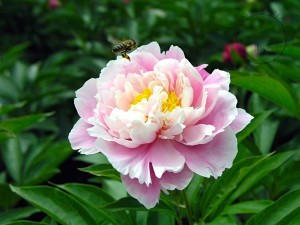 The peony is an ornamental and medicinal plant that features prominently in Chinese literature and Chinese medicine. Historical records show that it first thrived in China’s central mountains in modern day Henan province, as well as in the Southeast coastal region that is part of today’s provinces of Zhejiang and Jiangsu. Both the Shanhai jing (Classic of Mountains and Seas) as well as the Shen Nong bencao jing (Shen Nong’s Materia Medica) attest to the original abundance of wild peony on the sacred “Central Peak” Mt. Song, which was associated with the Heart in the ancient Chinese system of correlative cosmology. Local histories record that the lords of this region sent peony flowers as tributary offerings to the king of the Xia dynasty as early as 3,900 years ago. By the 5th century AD, the alchemist Tao Hongjing remarked that the best medicinal peony is wild-crafted in the hills of Southeast China.

Around the time of the summer solstice, also associated with the Heart in ancient cosmology, the peony unfolds its white and red flowers in hundreds of varieties. Peony flowers are large and beautiful, and enjoy a type of esteem in Asian culture that is similar to that of roses in the West. According to the 16th century herb scholar Li Shizhen, one possible meaning contained in the Chinese name for peony is “The Beautiful and Delicate Medicine Plant.” The Shijing (Classic of Poetry), China’s earliest collection of songs and poetry, first cast the peony blossom as a symbol of romantic love 2,800 years ago. In addition, peony flowers were offered when friends where taking leave from each other, therefore the plant’s nickname Jiangli (Imminent Departure). For all these reasons, the peony became one of the earliest cultivars adorning the ornamental gardens of the imperial palace and the aristocracy in ancient China. 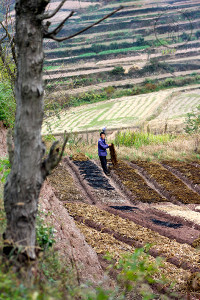 The sizeable root of the peony plant was harvested early on for dietary and medicinal use, inspiring a variety of monikers. The most common name for the herb in Chinese texts is Shaoyao 芍藥, referring to the fact that a decoction or sauce made from the root has a filling (勺 ), moistening (汋), and astringing (約) effect on the body. When processed in certain ways Shaoyao can stabilize blood sugar, making it a suitable aid in traditional fasting and cleansing rituals, similar to the herbs Baizhu and Huangjing favored by Chinese hermits. Among the hundreds of Shaoyao varieties it was the more tonic and elegant Bai Shaoyao or Baishao (White Peony; Paeonia lactiflora) that gradually became most valued for this purpose—in comparison to the more moving and rough looking Chi Shaoyao or Chishao (Red Peony; Paeonia veitchii), a variety that grows mostly in Northern China and Mongolia.

Another name for the Baishao root was Baizhu (White Tuber that Nourishes Like Sorghum), linking it to the well-known spleen tonic of the same name on one hand, while referencing the use of peony root as a nourishing and thickening agent in cooking on the other. Yet another appellation for peony root was Jieshi (Resolver of Food Toxicity), explained in greater detail in the botanical section of the 12th century work Erya yi (Wings of the Erya Dictionary): “No other herb in the materia medica is better when it comes to treating toxicity from food or drink.” During the 2nd to the 9th century, this particular aspect of the therapeutic spectrum of Shaoyao made it a common ingredient in the esoteric processes of Daoist alchemy, which involved the alchemical fusion of minerals and the buffering of heavy metal toxicity with plant materials. A few modern herbalists still utilize this effect, by adding Baishao to remedies that feature large amounts of Fuzi (Aconite) or other ingredients with toxic potential.

Shaoyao is one of the most commonly used herbs in the Chinese materia medica. It exhibits a broad spectrum of therapeutic applications, since ancient herb scholars described it as a substance that can enter and affect almost all organ networks. Alternate versions of the classic Shen Nong bencao jing attributed different flavors and therefore multiple affinities and functions to the herb Shaoyao: bitter (Shen Nong), sweet (Tong Jun), sour (Lei Gong), and salty (Qi Bo). Traditional descriptions of its qi/temperature range from “neutral” to “slightly cold.” Its energetic momentum is described as “descending” or “slightly ascending within an overall descending momentum.” Shaoyao, in essence, is one of the representative yin herbs in the Chinese materia medica, used to moisten and regulate yin/blood as well as to cool, descend and astringe exuberant yang qi. Baishao’s various sub-functions can be synthesized in the following way:

While Baishao was once wild-crafted on the mountains of central and SE China, virtually 100% of today’s high-volume supply is grown in agricultural centers that have specialized in the cultivation of medicinal peony roots for centuries. During the last millenium, four such centers have developed on the Chinese mainland, producing different sub-varieties of the Paeonia lactiflora species:

Most ancient records identify Bozhou, the location of China’s largest herb market and ancestral home of the 3rd century shaman physician Hua Tuo, as the most prolific producer of ornamental peony. In 1821, the Qing dynasty poet Liu Kai described his view of the flower capped countryside surrounding the city, reminding Western readers of the tulip fields in Holland: “Peonies bloom outside the city walls for miles, as far as the eye can see—every farmhouse grows them in front and in back.” Since the production of ornamental peony shifted from Bozhou to nearby Heze during the last century, Bozhou has become the most prolific producer of medicinal peony. At last count, approximately 30,000 acres in the city’s vicinity were cultivated for the purpose of producing Baishao. More recently, government development grants have turned the city of Zhongjiang in SW China into another major producer in the Baishao agro-business.

Most of the Baishao available on the international market today thus originates from Bozhou. The Bo Baishao variety of peony does not require the labor intensive trimming of side roots after the first year, and can be harvested after only two years in the ground. Roots are large and exhibit a gleaming white sheen—attractive visual features in the eyes of Asian customers—and fertilizer-based mass production has kept wholesale prices low. While these qualities have made Bo Baishao the most competitive product on the present market, classical scholar physicians have long agreed that the medicinal properties of peony roots grown in this region are of inferior quality. The 11th century herb scholar Chen Cheng, still quoted in Li Shizhen’s authoritative Bencao gangmu (Compendium of the Materia Medica) 500 years later, states clearly that “[Shaoyao] is most abundantly cultivated in Zhenyang of the Huainan region (today’s Bozhou); while the roots there grow particularly large, their fragrance [particular to medicinal Baishao] is of poor quality, and thus unsuitable for medicinal purposes.”

Traditionally, the most valued type of medicinal Baishao has been Hang Baishao, which originates from the mountains surrounding the city of Hangzhou in today’s Zhejiang province. The 18th century clinician and paozhi expert Huang Gongxiu summarized the opinion of his trade when he wrote: “The best kind of Baishao grows in Hangzhou.” His well-known colleague Zhang Xichun elaborated 150 years later: “Baishao is cultivated in the South and the best kind is produced in Hangzhou. Its color is white, bearing a trace of red that is particularly obvious on the outer skin. Because both the white and the red intermingle, the root’s ability to regulate both qi and blood is outstanding.” Hang Baishao does indeed exhibit a reddish sheen in comparison to other types of Baishao. When subjected to laboratory testing, Hang Baishao tests significantly higher in certain active ingredients in comparison to species cultivated elsewhere.

Because of the high demand for genuine medicinal Hang Baishao, the early 1970s saw a period of severe overproduction (100,000 tons). This circumstance caused many of the local fields to lay fallow for almost a decade. In addition, the production of Hang Baishao requires the trimming of small roots after one year, in order to direct the plant’s energy away from the flower toward the subterranean parts of the plant. Hang Baishao, moreover, takes a cultivation time of 3-4 years before it can be harvested—significantly longer in comparison to other varietals. Without the application of artificial fertilizers, the root can even stay in the ground for 6-8 years for the purpose of gathering additional potency. This significant difference in labor and cultivation time, however, has so far not been rewarded by the market place. Prices for Hang Baishao have remained low, and local peasants thus do not consider it a profitable crop anymore. As a result, the cultivation of genuine Hang Baishao has descended into a state of severe atrophy. Only about 20-30 acres are being planted every year, producing a total of 50 tons per annum.

Classical Pearls has made a special effort to partner with a small family farm in a remote valley near Hangzhou, one of the few places where Hang Baishao roots are still cultivated according to traditional principles: fields are fertilized in autumn with a mixture of animal dung and ashes from mountain weeds, then irrigated with local spring water. The roots are harvested after 6 years in the soil, then sun-dried. 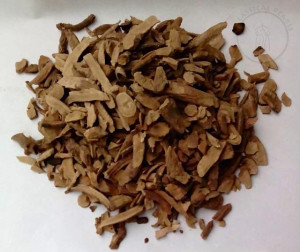 Based on Japanese pharmacological research, the skin is deliberately left on in all Baishao roots utilized by Classical Pearls. Since Baishao tends to be cooling in its unprocessed state, a variety of processing methods are employed to moderate this quality: dry-fried to moderate its cooling effect on the middle burner (Baishao single herb extract, Golden Pearls); fried with aged clay for enhancing its regulating effect on the Spleen/Stomach (Earth Pearls, Metal Pearls); fried with vinegar for enhanced anti-pain effect and strenghtening its regulating effect on the liver (Ease Pearls, Cinnamon Pearls, Bamboo Pearls, Mama Pearls, Moon Pearls).
Sitemap